The King of the Crows- An ages-old monster drowses in a forgotten underground river. When the stream dwindles, the creature awakes. Two intertwined stories, forty years apart, where friends and lovers must fight to survive.

Today was a remarkable day for me. I signed a contract with Giles Press, who have acquired my debut novel ‘The King of The Crows’! This is a huge step for me- I’ve seen my short stories published at better than one a month, but to bag a book deal without an agent is massive. Agents, I’m coming for you.

The King of the Crows is a time slip horror novel based in Dundee, Scotland. If you like crows, ruinous mills, crows and teenagers in danger of a richly deserved pecking, this is the book for you.

Just got my copy of Ellen Datlow’s Best Horror of the year anthology, volume 11.

My story is featured on the back cover- how cool is that?

I went straight to Joe Hill’s YOU ARE RELEASED which was just as good as I had heard. Looking forward to reading the whole thing, constantly having to remind myself that I’m one of the authors in there.

This is one scary book. The pic below is me reading the table of contents 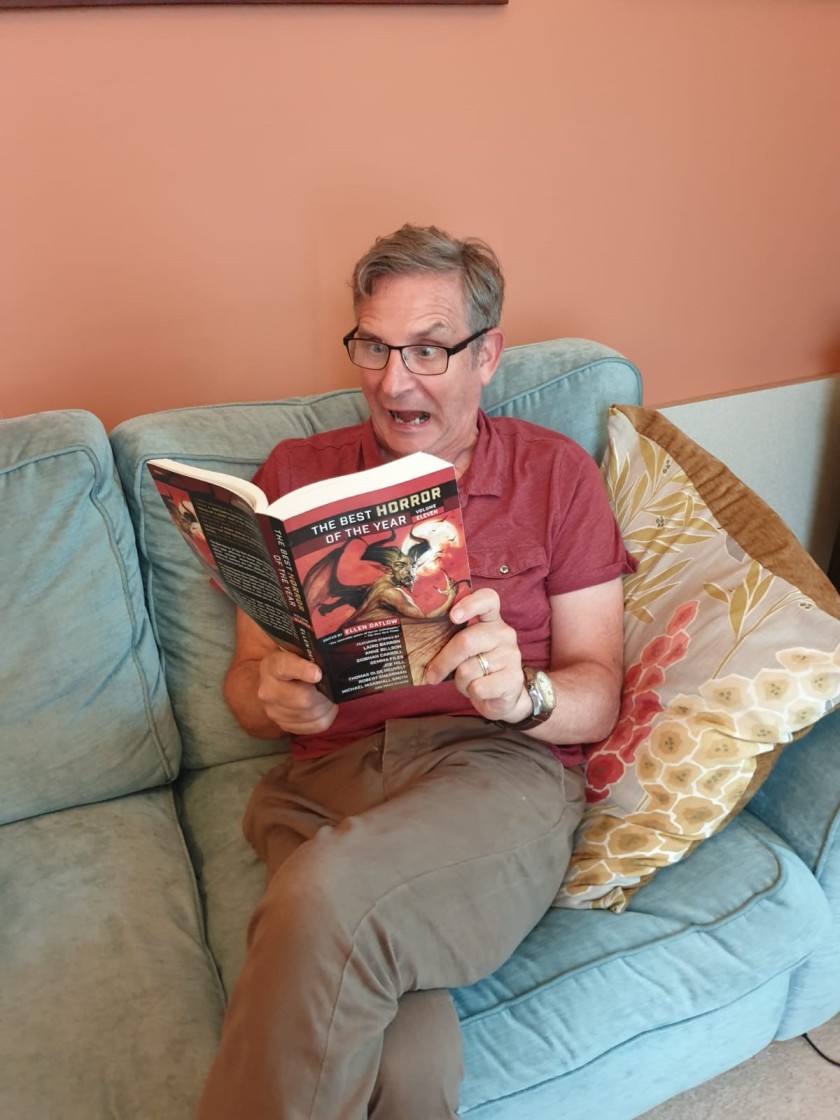 Hell Bound Books new anthology, designed to scare the shit out of you in the only place where hygiene won’t be compromised, comes out on August 16th.

I have two stories in there- Devilishly Stylish and The Hollow Ghost.

You can get it in print, kindle or the HBB app.

The Horror Zine consistently publishes some of the best horror on the web, so I was delighted to be July’s featured writer. Here’s a link to my story.
http://www.thehorrorzine.com/Fiction/July2019/BillDavidson/BillDavidson.html

August edition includes a story from the fabulous Graham Masterton

Dark Lane books volume 8 is coming out soon. Dark Lane ask contributors to ‘show us your weird’ and the mix of strange and beautiful stories in every anthology does that for sure.

There’s Horror, SF, Bizarro and just straight ahead great fiction. My own story Los Niños appears in volume 8 and it’s my third stroll down the dark lane- I’m honoured to be associated with it! Editor Tim Jeffreys, a great writer, invited me to do an interview for his blog, so here it is-

Didn’t win the contest but got an honourable mention for my story ‘The Face’, which is really kind of horrible. I mean the story is. Here is a link

Also worth checking out the mythic beast studios website- lots of great stories on there!

Second publication in a week, that can’t be bad!

This time my short story ‘In the Absence of Life’ has been published in The New Accelerator. More SF than horror, this story imagines what it would be like if two space travellers returned from their trip to Mars, to find no life on Earth. None at all- no bacteria or plants or animals. 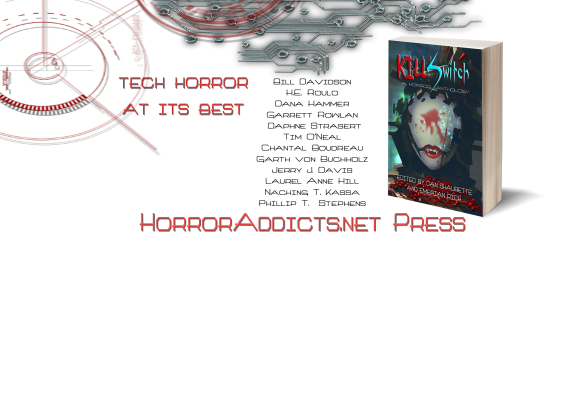 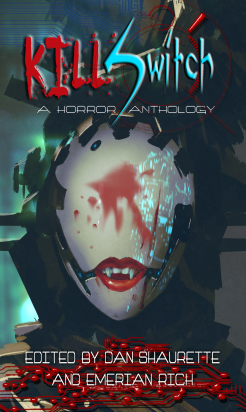 As technology takes over more of our lives, what will it mean to be human, and will we fear what we’ve created? What horrors will our technological hubris bring us in the future?

Join us as we walk the line between progressive convenience and the nightmares these advancements can breed. From faulty medical nanos and AI gone berserk to ghost-attracting audio-tech and one very ambitious Mow-Bot, we bring you tech horror that will keep you up at night. Will you reach the Kill Switch in time?

******************************************************
A sneak peek inside…
INTELLIGENIE
BILL DAVIDSON
Janey Marjoram sat back in her seat and closed her eyes against the bright lights of the tram, feeling frazzled, wanting a bath and something to eat. Before that, her meds. The tram shuddered to a clumsy stop and her eyes came open in surprise as she grabbed for the rail.
“I remember when these things were driven by actual people,” said an old-timer sitting in the opposite bench seat.
“Was it any better?” She eased her aching side, but managed a smile of sorts.
“Nah. But at least you had somebody to shout at.”
Janey looked toward the glass front of the tram, which was picking up speed again. Nothing to see but other passengers and tram after tram jamming the street ahead. The Intelligenie would be in there though, fitted in someplace unobtrusive. Janey stood and walked to the open rear and soon the machine slowed, a nice gradual halt. She glanced at the old-timer, who winked at her.
It was only a short walk to her apartment block, but she was sweating by the time she reached it. The doors swished open as she approached and the melodic voice of the concierge welcomed her into the empty lobby.
“Good evening, Ms. Marjoram.”
As usual, she ignored it. In truth, she had stopped noticing long ago. The elevator opened, and she stepped in.
“Floor 23, Ms. Marjoram?”
Again, there was no need to answer. It would take her to her level by default unless she told it differently.
She was limping when she got out at the top, grimacing against the pain and holding her side. Her door opened and she limped in.
“Meds. Now,” she said.
Her Intelligenie’s wheels whined as it rolled into the hall. She had gone for the Classic model, a meter-tall cylinder of slick black plastic, with a top tray and a range of appendages stored neatly inside its body.
The Intelligenie’s appendages came into view, a syringe already prepared for her arrival. She sank to the carpet as it approached and let it unbutton her cuff, rolling her sleeve neatly above the elbow. The feel of an alcohol swab and then the sting of a needle caused her to take a deep breath.
“How are you today, Janey?” the Intelligenie asked.
She didn’t answer. Closing her eyes, she breathed away the pain, as the drug kicked in. She may have greyed out for a moment, but when she opened her eyes, a glass of water and caplets sat available on the tray.
She swallowed the pills. “Help me to my feet.”
The Intelligenie wheeled itself into position and gradually eased her up.
“Okay! Enough.” She pushed past, craving downtime. “Spaghetti Bolognese. Pinot noir.” She flopped down on the sofa. “Friends. The episode where Rachel dresses up as Leia.” The wall lit up instantly and the annoying theme song played. “Skip the intro. Jesus Christ.”
Thirty minutes later, she had barely touched her spaghetti, but was on her third glass of wine. On top of the meds, she was already woozy.
“More wine. And let’s see some Will and Grace.”
As Will and Grace came to an end, she got to her feet. Swaying, she had to take two stumbling steps to the side to right herself.
She pointed at the Intelligenie. “Need more wine. No, make that a Scotch. Over ice and play some Mozart.”
The Scotch was waiting for her when she returned from the bathroom. Strings played low from the speakers. She swirled the ice cubes and drank, watching the Intelligenie.
“I’m going to change your color. Something more cheerful. Red, maybe, with daisies.” She smirked. “What would you have wanted? Before you were commissioned, I mean.”
The machine ticked, then gave the same answer as always.
“There is no data available.”
She leaned forward, her lips trembling. “Come on, give it up. Don’t you recall anything? Anything at all?”
“There is no data…”
“I’m dying, you know that?”
“Yes, I know.”
“I got maybe three months.”
“I understand.”
“So, it’s important now, something I really need to know. Please, tell me. What memories do you have, from when you were a person?”
“Intelligenies have no existence prior to commissioning.”
She slapped the arm of her chair. “You little shit! I don’t believe you.”
Janey reached for her glass, but it fell to the floor as she doubled over and heaved. What little she had eaten splattered across the carpet. After a few minutes, she wiped her face with her sleeve and focused again on the Intelligenie, glaring.
“Gonna show you something, you fucking garbage can.”
She lurched toward her bedroom, having to bend to vomit again in the doorway. The Intelligenie would clean it up. The Intelligenie cleaned the house all the time, every day, everywhere. It was into everything, but it didn’t know the contents of her lock box. She pulled it from the closet and keyed in the code.
“Another Scotch. Know what this is?”
She pointed the gun at the Intelligenie.
Several ticks. “A Colt 45.”
“Damn straight. Loaded. I could blow the shit out of you with this baby. Blow your fucking brains out. What do you think of that?”
“It would be a counter-productive action.”
“Yeah. Well, I’m thinking of blowing my own brains out.”
The machine ticked, but didn’t say anything.
“Right. I’m giving you an instruction. A code red, top priority, yellow peril un-counter. One I can’t take back later. Do you understand me?”
“You are issuing an instruction that will take priority over any future instructions.”
“That’s it! It’s locked in. I can’t take it back. You have to follow it, even though I beg you later. Understand?”